There it was – the day of the Marathon. The day that I had been anticipating since February!!

I’d prepped everything before hand the previous night, including taping my name to the front and taping ‘26.2 Virgin’ on the back. 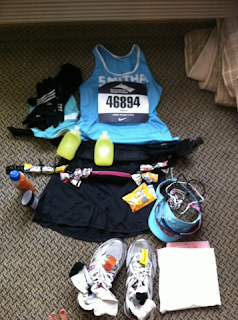 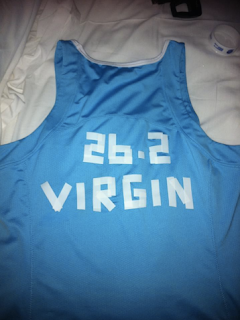 Lorraine and I were staying 2 blocks from each other and we decided to meet at the bus stop for a cab/bus, whatever came first. We got onto a bus at about 6:30 and  were at the designated meeting spot on the steps of the art institute at 6:40am. Dick and Felecia joined us soon and after the one bright smiley picture, headed over to the start. We had just enough time for one portapotty stop before joining the corrals. 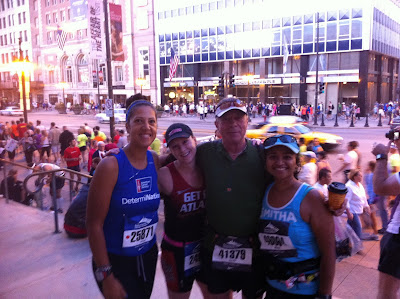 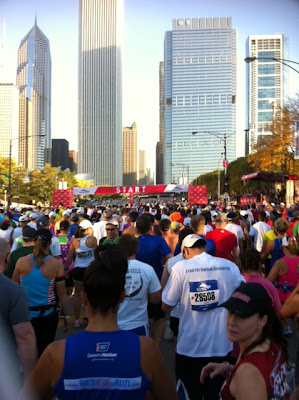 We crossed the line at 22:xx min after the elites took off. Felecia was off like a bullet with Dick charging behind her. Lorraine fell back in step with me and we started on our journey. We were talking, admiring Chicago, taking pictures, laughing over missed run/walk intervals, Lorraine was tweeting, people were calling out my name/virgin status and things were going well at a nice controlled pace around 13:20-13:30.

The first 4 miles or so was all downtown in the shade of tall buildings. When we hit Lincoln Park Zoo, I was sweating quite a bit. Now, the weather was in the back of my mind all week, but I had refused to let it affect me. But actually feeling the sweat was a little … off-setting. The portions where there was no shade, I could feel the sun on my skin. It was also about the same time when I realized the enormity of what I was doing – I was running a @#$%^%#& marathon!!!! 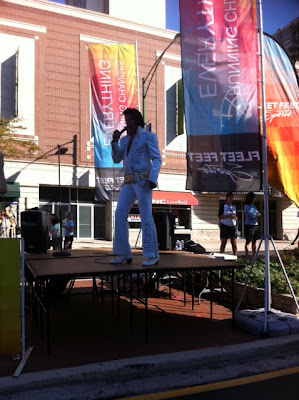 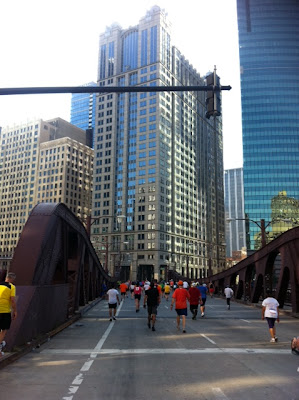 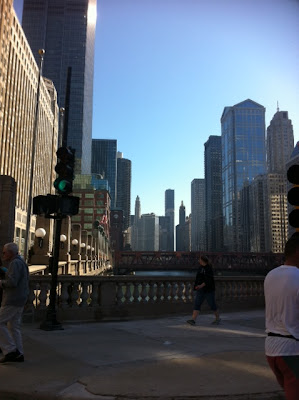 Here’s a where a weird thing happened – at around mile 8-10. I started almost hyper-ventilating, I could feel my chest tightening, my heart was going pitter-patter faster than it should, I felt myself going out of my grove, I was focusing too much on the heat, I wasn’t able to focus, I was just … off. Now, that has NEVER happened to me in my training runs. I’m usually off the first 2-3 warmup miles and then get into it and can go on. This was the opposite. Lorraine kept telling me (correctly) that I was psyching myself out but something was getting to me, and I couldn’t snap myself out of it. I was ready to be done already!!

Lorraine was feeling strong and she went ahead after about mile 10 (I’m so glad she did because she turned in a fantastic almost negative split time). At one point, I’m sure I started hallucinating – I thought I was running on the track trying to catch Leslie to talk about Phideppides. I saw a lady carrying her dog in her hand, and I thought it was Cherie with a cat telling me to run. I called out ‘Hi Coach Michael’ to someone who totally did NOT look like Michael!
Love and Support
That’s when I started posting on Facebook to keep my spirits up. I had a lot of responses from friends all over. Coach Karen encouraged me via text. And Coach David’s response to my post/whine about the heat calmed me down almost instantly. (I must be either deathly scared or immensely fond of them both, because their words worked!!).

I was the around the 12mile/half way mark, and with that newfound calmness, I decided to slow down (not that I was going fast or anything, but until then I was on steady pace for a 5:45 finish).  I poured glasses of water on myself, stuck a couple of wet sponges inside, got some ice in my bra and went on.

Half way point and beyond – Back on Track
The weird thing – I THEN got into my groove. Yes, I was 2 MINUTES+/mile slower than what I was hoping for/capable of. But I had successfully gotten through that wall/whatever it was that hit me and I was afraid of messing it up. I was really enjoying myself. Guru’s friend met me at Mile 16 and he said I was looking fresh!

Something started hurting at mile 16 that had me a bit worried, I couldn’t even figure out what it was. I didn’t want to hit that wall again, so I started playing little games.

I recollected the toughness displayed by Steve Waugh, the Australian cricketer whom I’ve admired since I was 11.
I closed my eyes for a split second and visualized things that made me happy, things that made me smile.
I imagined myself running while singing ‘I could’ve danced all night’ like Audrey Hepburn (why that song, I don’t know .. it just popped into my head).
I used the words I had practiced ‘Relax’ ‘Glide’ ‘Form’ ‘Power’ to keep going.
(I may have gone over dialogues from Pride and Prejudice and imagined Colin Firth’s Mr. Darcy cheering me on, but …. I’m not admitting to that 🙂 ).

Never stopped smiling all the way through.

It is really strange that at this stage, inspite of the temperatures outside the downtown reaching almost 80-82F and me moving at slower than snail’s pace, I never once doubted my ability to finish. I was slow and couldn’t/didn’t want to go faster than that, but I was steady in that new slower pace and feeling mighty cheerful in my heart. Plenty of nagging doubts and anxiety at 8-12 miles; but none at the point where it is said that people really hit the wall!

But then I’m a strange creature that has got to do things differently, so ….

It was soon 23 miles and I brought a girl to tears when I told her that we had just 3 more miles to go. When she got tearful, it almost made *me tearful at the realization – This was IT. This was the moment I had been training with my heart all summer without missing any training runs. I told myself, that this was a moment to be happy about, not to waddle in tears.

So I went about running with my cheerful self.  Abandoned my run/walk intervals and just kept running even though it was still slooooow. Got instep with a guy who had come from Australia for his first marathon, talked a bit about cricket and Melbourne, and got a snarky comment from 2 girls on how I could manage to talk and grin so much at that point. (Ha!! They don’t know me!)

Guru and the kids were waiting for me just 0.2 miles from the finish. As soon as I turned onto Roosevelt rd, I sprinted up that hill/bridge to hug my girls, and sprinted down to the finish. I remembered to take my visor off, smiled even more brilliantly than before and raised my arms for a triumphant finish (In my mind, I had no doubt that I was Liliya Shubokhova).

I am a MARATHONER!!!

There were people crying all around me, but I was jumping and pumping my fists and yelling YES !! I hugged the random guy who gave me the medal, and hugged two more people who were standing nearby (Thank God for total strangers who I’m not likely to ever see again!). I danced all the way down the chute to collect the miserly food they had, was bitterly disappointed on not receiving a heat blanket (Wonder how I can get one now!) and proceed to talk another random stranger’s ear off.

Whew! What a rollercoaster!

Despite the initial hiccup, I LOVED doing the MARATHON (yes, I’m shouting it aloud!). 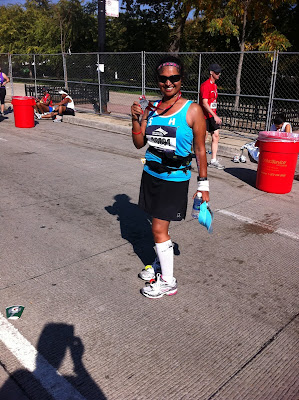 Loved Loved Loved the Whole Experience
The journey to get to Chicago was as much fun as Chicago itself. I’ve discovered a lot of things about myself in the process.
As everyone knows, Chicago is a great first marathon. Crowd support was awesome, especially in the first sections of the race. Some of my favorite signs were –
“Run Mom. There is a shoe sale on!”
“You are so pretty”
“Rock on, Complete Stranger”
and of course, the one that never gets old – “Chuck Norris Never Ran a Marathon”. 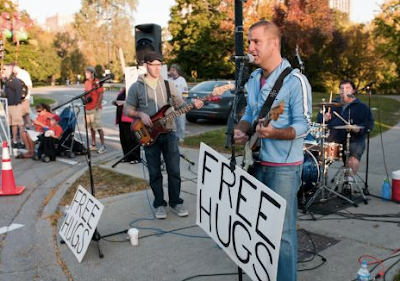 Towards the end, the entertainment had thinned and the people who were around were cheering for their runners, but I really did not care for it at that point. I was gathering my energy from the other runners around me.

I’ve learnt that a LOT is mental; where the mind goes, the body will follow.

So, what really happened?

I don’t know what exactly happened to me in between though; miles 8-12 were the worst in the entire race. It *felt like the wall, but really, it couldn’t have been that so early, could it? I was going at the pace that I’d planned to (that I had done in our 21miles), had fueled and hydrated as I had planned to, paying extra attention to hydration and electrolytes.

Maybe the superlong wait between breakfast at 5:30am and starttime of 8am?
Maybe I choked from nervousness?
Maybe my body(or mind) really rebelled against the heat (which didn’t seem to affect other people)?
Maybe that 21 miler pace in perfect weather was deceptive of my actual speed and I’m just  really slow?

I also apparently ran 27.12 miles instead of the 26.2. The Queen of England had nothing to do with that one!

At this moment, while I’m still feeling ecstatic, I hate to think that I wasn’t mentally tough enough to “gut” it out at a slow 13:20 pace that I was capable of, or atleast to pick it back up once I felt better, so I’m just focusing on the fact that I ran smart in the heat, and finished joyfully.  My plan C (where things don’t go as planned) was for me to finish smiling and want to do another marathon. I did that.

Thank you, One and All

I cannot put into words how much Get Fit’s support and love yesterday meant to me and how amazing it was to visualize you all running with me (or mostly in front of me). I’m so proud to train and laugh with an amazing group of people. And today – I’m incredibly proud of myself.

Since I’m a rockstar winner, I want to thank everyone Academy style.

Thank you, Karen and Michael for your guidance and confidence in me.  I love all my yellow running buddies, who were the best cheerleaders! Thanks to David who always made time for a less-than-average “athlete” like me and put up with a zillion questions from me. Barbara, Olga, Marietta and Beth – I have loved listening to your tales in Starbucks and have been so encouraged by your enthusiasm. Thank you, Universe, for introducing me to Andrea without whom I’d never have dared to dream. Thanks to Cherie for the constant encouragement (and her cat), to Leslie and Phidippedes, to Orlando for helping me with food choices, to Yvette, to Dr. Pam for taking such wonderful care of me and advising me. Thanks to each and everyone of Get Fit Atlanta peeps who have encouraged me so much and embraced me into the fold.

Thank you Becca, Ashley, Michaela and other campers who’ve inspired and cheered me on.

And even though he would be totally embarrassed if I give him a public shout-out – thanks to Guru for being wonderfully supportive about my training and my obsession with the marathon. (I bet he is more glad than I that I’ve gotten through the first one!). I can’t wait to cheer him on at Savannah next month! And my kids, my wonderful kids who have bragged to everyone they know that Mummy is running a marathon in Chicago 🙂

I can’t stop at this one; to be left wondering what more I can do.

Watch out, folks. The FauxRunner is not done just yet. 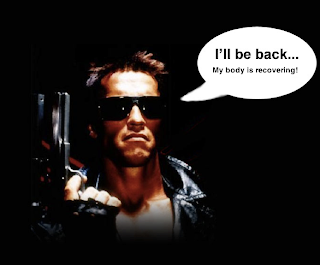 Photos from the Marathon 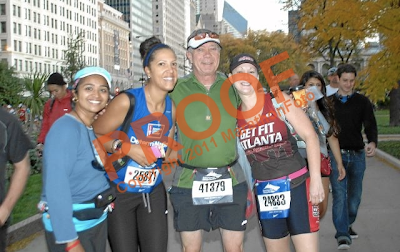 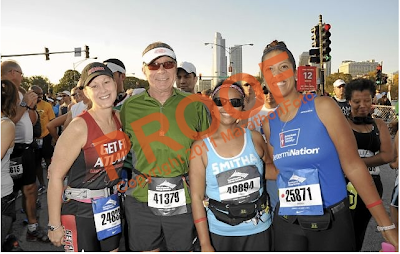 25 Days to Chicago – Why am I doing a Marathon?