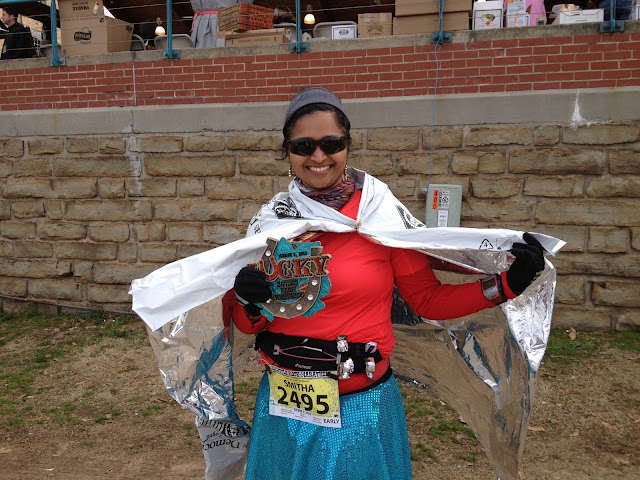 I chose to run Little Rock Marathon for the promise of a huge medal. In spite of a chilly 22F start at 6am, I started nice and slow and my race strategy ‘Start Slow and Back Off’ (thanks to One More Mile) paid off. The race was very well organized with plenty of support and aid stations stocked with bananas, oranges, pretzels and even pizza, beer and mimosas on course. The hills weren’t anything bad compared to Atlanta and since I was mostly walking anyway, it didn’t matter.

The bonus of the race was being able to see the beauty of the elites flying by, and to be able to catch some of my faster runner friends on the course. With the slow and steady run/walk, I never hit ‘the wall’. The race was worth the struggles I’ve had during training season and I was rewarded with the HUGE medal for my efforts and perseverance.

Except – it is not the end.

This marathon was not about me running to the finish and earning a supersized medal.

It was about rediscovering my running self, the shared journey and emotions of other people, the connections I made and renewed, the determination of some amazing people, the unexpected kind words that made my day, …

I went into the marathon thinking nothing about the time, but only about my mental ability. I wanted to see how the marathon would feel after an uninspiring training season. Not the physical aspect of it which I knew would be painful, but would I still be able to enjoy running or would it be 26.2 miles of mental battle?

What happened that day blew my breath away …

Running buddies make a Marathon seem like a 5k

While searching for some of my other early AM starters, I saw someone who looked very familiar. I  recognized Ray – the Marathon Maniac that I had run the last 0.2 miles in Chicago last year!! He had helped me after the finish, tolerated a complete stranger crying and escorted me to the medical tent.

So of course, I started with him and his friend Todd, who were both planning on a very very easy 6:30ish pace (finish time, not the min/mile). Talking about history, politics, travel, books and everything else under the sun, 20 miles flew by! When I faded a little on the hills, they stuck with me and stopped me from negative chatter. If not for Ray and Todd, my marathon would have been a mental battle. They ensured that it could also be fun and that my mind never wandered anywhere else from the present.

Miracles happen, if YOU are determined to make them happen

I first ran into Dan in the early 2-3 miles. He was on a little scooter thingie with one good foot propelling it and the other resting on it. We talked for a bit and learnt that he was from Atlanta.  Saw him again at the aid station after mile 20 when he was taking a break and my running buddies were looking to hit the restroom. I opted to go on with Dan and told the others to catch up.

The amazing Dan was telling me about how he came to use the scooter thingie, having broken his leg the previous week. Faced with the option of walking it on crutches, he was given the scooter thingie at the expo just the day before and was determined to complete the marathon. (I also realized that his wife and I were introduced online by our massage therapist – Some pretty wild connection there!)  We crossed the finish line together and I am honored to have run with such a strong person. His determination was my inspiration for the last 6 miles.

I ran into Robert Reese, Executive Producer at Runner’s World in the airport shuttle and later at the airport. (I’m really proud of my ah-ha moment in making this deduction. He said he was from Allentown, PA. How many people who looked like a perfect runner could be from Allentown, PA, near Runner’s World HQ? He HAD to be from Runner’s World!) He had run a 2:52 marathon, a PR, but not what he had expected.
My thoughts immediately went to another person, who had also run fast but their goal had been equally elusive. While other people raved about the times of these two, I thought about how difficult it must be for them to not be able to celebrate what others would die for and more importantly, to keep looking ahead and not be caught up with either the adulations of mere mortals or the disappointment of not being ‘fast enough’.

While I know some people who sneer at the efforts of slower runners (slow being relative), neither Robert nor my other runner seemed to think less of people like me who did a marathon in MORE than TWICE their time. To them, it was each person’s goal for themselves. It is Me Vs. Me. Not Me Vs. someone else. Their focus was on bettering themselves next time, not to beat someone else’s time the next time.

To both Robert and my other runner – here’s wishing that you meet your goal soon and I hope that I am around to celebrate with you; in twitterverse/facebook or in real life.

During my last marathon at Chicago, I was a sob-fest. Crying on the shoulders of strangers and friends.
While waiting for the rest of our group to finish up, I saw this lady come in completely emotional, to the point of tears. Remembering my Chicago breakdown, I went up and hugged her and congratulated her. She cried on my shoulder for a while saying how hard it was and how she didn’t do well.
The next morning when Dawn and I went into breakfast, we talked for a bit with some people and the lady was the one who I had cried on me and I’d hugged!! She recognized me and it was now a happy moment all over again.

I had met Bart Yasso when he had come to Atlanta in July and had the incredible opportunity to have dinner with him. I ran into him at Little Rock after his seminar and said hello.
He was also the announcer at the finish line. I ran past him and gave him a quick hug. And to my utter astonishment, he announced “That was Smitha the FauxRunner ….” (or something close to that). If the finish line had not been 10 yards in front of me, I would’ve died and gone to runner’s heaven at having been recognized by him.

Post race celebrations brought one happy smile and glow after another. We danced and laughed and boogied at the after-party. Watching 30 people at the dinner table talk, swap stories, joke and laugh was an amazing thing. These were people who had come together and bonded over running (and triathlons/ultras over other things). It was a pleasure to watch them all celebrate the good runs and commiserate the not-so-good ones.

Also, have you ever met someone who unknowingly inspires you? Someone who has that magnetic draw that makes you want to try your best everytime you talk to them? I realized in Little Rock that I am very very lucky to know people who have this effect on me. Very lucky to call them friends, mentors and coaches.

I don’t know if it was the influence of post-race endorphins, but I received many compliments that made me smile, grin and glow; words that I will cherish forever, kind words that make me strive to be the best I can (sorry, they stay off the blog – ‘What is said on the marathon, stays in the marathon’).

I went to Little Rock burnt out and stressed out, ready to be done with long distance training, or even running itself. But the marathon showed me that its call is far stronger than my fleeting emotions and made me realize how much I love running. I am passionate about running, about stories and the history and the legends. I loved the journey that the marathon took me on. I loved the person I became on this journey.

Thank you Little Rock Marathon and the amazing people I had the privilege to meet/hangout with, for rejuvenating my running mind and soul. I am waiting for my body to catch up to start my next journey.

That weekend, I really experienced that elusive “something” that Emil Zatopek talked about.