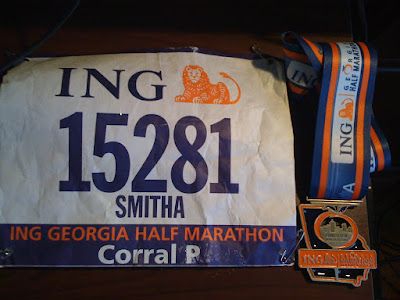 My First Half Marathon – and I’m hooked!

After a night of tossing and turning, the alarm clock woke me up at 4.30am. After quickly cooking breakfast for the girls and nursing Brinda, we waited for Stephanie (our babysitter) to come and we were off. Slight time delay and our train pulled into the station just as we were pulling into the parking lot. So we missed the 6am train. The next train would take us into downtown at 6.50am and we decided to leave our stuff in the car so that we wouldn’t have to check in our gear. I had more jitters as I saw other runners waiting for the train – everyone of them looked superfit.

The train got into downtown at 7am, the time the gun was scheduled to go off. Someone remarked that their fastest pace would be from the train station to the gear check. Everyone started jogging towards the starting point – we just followed the crowd. At 7.10am, we joined the huge crowd of 16,000 people who were crossing the start line in waves.

As I crossed the start line, I forgot my nervousness. Just soaked in the atmosphere and reveled in the dedication of so many others who had turned out on a rainy morning to run a crazy distance.

My initial gameplan was run 2 miles, walk 0.25 and repeat. Water stations were at every 2 miles, and it seemed like a good plan. Then I saw the hills! I had trained on hills, but this was nothing like the usual hills. They just kept coming and coming. I changed my plan to just keep going as long as I could. Guru later told me that I should’ve stuck to the original plan as his pacing group did the run/walk combination and he did not in the least feel tired towards the end.

Anyway – I tried to run on the sidewalk or as close to the sidewalk as possible so that I would not get in the way of the faster runners. The route of the half was great. We passed through parts of Atlanta I’d never even seen before. My favorite cheer message was at Martin Luther King’s memorial – a banner that read “I have a dream …. 13.1”.

Soon the miles were passing me by. Halfway point, the marathoners split from the us and the course through Inmam Park, Virginia Highlands and Piedmont park was much better for the next 3-4 miles. I took full advantage of the flat and the downhill and made good time. For the first time ever, I understood the elation one feels when you pass someone in a race 🙂

Shortly after I passed mile 9, I had my second gu and gasped at the time on my garmin. Under 2 hours!!! That was an almost 12 pace, and I had never had a near 12 pace. I was so pumped up. I felt that 2:45 was attainable.

Soon after I started feeling a faint pain in my hips. I ignored it. I was feeling great, I wasn’t tired, my breathing was great, what could possibly go wrong? There was a huge hill going from mile 10-11 and when I hit mile 11, I couldn’t move. The pain was unbearable. In my frustration, I thought I had pulled a muscle. I only realized later that I had cramped up (In the fear of having to use the potty, I didn’t hydrate enough early on.). If only I had stopped to take help at the medical station ….

Anyway, mile 11-mile 13 was worse hills than the entire race. And thats saying a lot. I took 45 minutes for those 2 miles. And my heart sank when I saw my 2:45 pass by. 3:00 came, and I still was a few yards from the finish line. But, when I finally crossed the line I didn’t think of the pain, or the missed time.

The first and foremost thought in my mind was that I did it!! Me – plump, couch potato, non-sporty and definitely non-hardcore-runner. I just finished a HALF MARATHON. A distance of 13.1 miles. An incredible journey of 13.1 miles. Not even a slow time and cramped muscles can take away from that achievement.

I headed over to the medical tent to get help with my hips, and they stretched me out and iced me, and viola – I was fine. Guru and the girls picked me up at the MARTA station and we headed out for a well deserved post-race lunch at Palace. 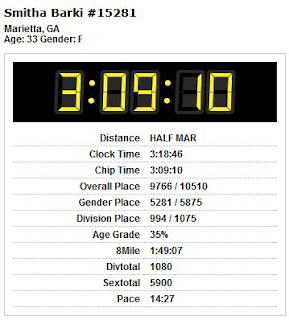