I like my food guilt-free and 13.1 miles is the best way to earn that food!

A week before the race I had a trail run disaster and sprained my ankle. I was given clearance to run on thanksgiving, but not the practice runs. I was a little wary of going in with only one 12 mile run (almost a month ago), but I’ve done 13+ miles about 10 times in the past 6 months. And so it should be a cakewalk, right?

I carpooled with a couple of people from Get Fit Atlanta to get to the race. Slight confusion at the start as I’d left my racebelt with number, Gu and water in the car and I was locked out(!). Luckily, after a bit of running around, I was able to get my stuff out and join the start line just as my corral was starting.

About mile 3.5 – it all started going bad. I had to use the restroom, something that I NEVER had to do during any of my training runs. That took about 12-15 minutes. I was frustrated, but tried to pull myself together and go on. 2 more miles in, and I had to go again! Once done, I totally lost momentum and just wanted to finish. I still was at a decent pace and hadn’t really slowed down too much. Something around mile 9-10 started hurting and thats when I got more frustrated. These were muscles that had not hurt me even during the marathon!

The last 3 miles was a meeting with my evil twin sister, my tired and aching muscles, and my frustrated emotions. The last mile was a sob-fest. Tears of frustration and the knowledge that this was yet another race which did not go as planned (either because I had not set realistic goals, or because I executed my plan poorly, or because I crumbled mentally again).

The thing that upset me the most – This was the first time I was running with Get Fit Official Gear. And I am upset that I let the team down. 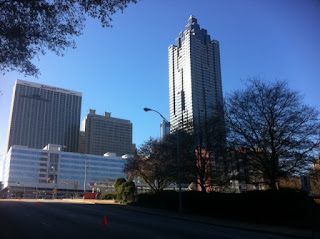 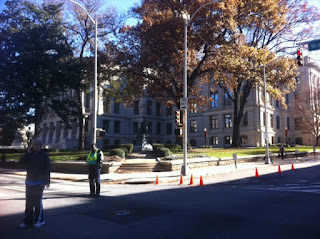 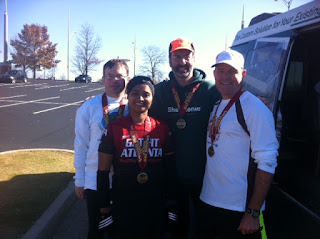 It has taken me a good 2 days to come to peace with my performance in the Thanksgiving Day Half Marathon.
To understand that this needed to happen, so I can learn to deal with it.
To understand my limitations and my strengths.
To understand that everything can go wrong without warning. And to learn a very important lesson –

I had decided to treat this race as a training run, yet I did not do any of the usual preparations that I put in on friday nights.
I did not pay attention to my pre-race hydration and dinner.
I had my breakfast PB/banana sandwich on a bagel(instead of bread) – a first.
For various reasons, I had intermittent breaks in weekday runs (and the weekend long runs) after finishing Chicago.

I knew all this at the back of my mind, and yet continued to make those bad decisions. It was, after all, “only” 13.1 miles; a distance that I’ve done more than 10 times in the past 6 months. I showed absolutely no respect for the distance, or my body’s ability to do that distance over hills with minimal training and a recovering ankle.