PINspiration Wednesday: The Little Engine That Could 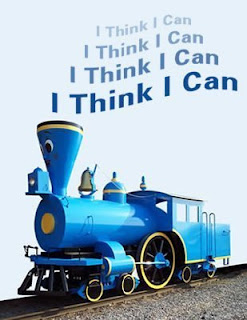 I was putting away my minions’ old books when I came across this one. And I knew it was meant for me! And you, and everyone. And so, even though this is technically not from Pinterest (it will be after today!), I decided to use this for PINspiration Wednesday!

Why is this such an important aspect of racing? And what can you do to develop it?

When you follow your training program with discipline, your body learns to do what you’ve taught it to do. Your mind is what plays the devil. Training the mind and getting it in your corner is an essential and often neglected part of training.

And it all starts with the basic belief.

What are some things you can do to think positively?

1. Trust your training – if you have put in the work, there is nothing worse you can do by doubting that effort.

2. Positive affirmation – Think power words, running mantras, visualizations, anything that would put you in that positive frame of mind.

3. Focus on what you can control – Instead of wondering about your performance, focus on breathing, focus on executing your race strategy.

5. Be prepared – Be Prepared for whatever race day throws at you, including mind games and the unexpected.

A little railroad engine was employed about a station yard for such work as it was built for, pulling a few cars on and off the switches. One morning it was waiting for the next call when a long train of freight-cars asked a large engine in the roundhouse to take it over the hill “I can’t; that is too much a pull for me,” said the great engine built for hard work. Then the train asked another engine, and another, only to hear excuses and be refused. In desperation, the train asked the little switch engine to draw it up the grade and down on the other side. “I think I can,” puffed the little locomotive, and put itself in front of the great heavy train. As it went on the little engine kept bravely puffing faster and faster, “I think I can, I think I can, I think I can.”

The Friday Five Pin it Party