This crazy adventure (crazy by my mortal standards) started just 2-3 weeks back when the Vinings Downhill 5k date was announced. August 18th. The same day as the Alien Half that a big bunch (almost all?) my running buddies had signed up for.

So perhaps I should backtrack my onset of crazyness when I signed up for the Alien Half. 6:30pm, August, Atlanta humidity, Aliens. Definitely NOT my cup of tea, especially since I’ve had a deathly fear of UFOs since grade 3 (I shall never forget or forgive the boy who would share/makeup UFO stories to scare me!). But it seemed fun. At that time. And a friend from Raleigh decided to drive down to do it with me. And Shirley, Michelle, Garron and some others decided to do it too. So more fun I thought. At that time. 3.1 + 13.1 = 16.2, which is the mileage I needed over the weekend, so a fun way to get them in, I thought. At that time.

Plenty of words of caution to me from everyone about not racing the Half. No worries, I was only doing it for the distance and some fun catchup time with my friend. But the Vinings Downhill 5k’s name was alluring and calling to me. Downhill! The magic word! Even though I hadn’t really trained for a 5k and with all the weird issues, some real and some phantom, I’ve had this training season; I’d been doing speedwork only for the past 3-4 weeks. But that siren call of “Downhill” made me want to run it to the best of my ability with no set expectations. Not race it, but do the best I could; if that makes any sense.

Vinings Downhill 5k and a PR

Morning of the race, I discovered that my husband had taken the Garmin (that I had charged and hidden among my stuff !! – The article about “love” and “sharing” among athlete couples came to my mind, along with a few choice words) to run with the group and I was left to run naked. Weird thing – NO panic attack at that thought! Maybe I have matured a bit as a (faux) runner 🙂

They were NOT joking when they called it a downhill race. “Controlled fast” was the thought going through my head as I ran down the hill. I must’ve been passed by almost everyone through that stretch, and once that ended to go uphill – I passed them. Ha! Some of the hills got to me a bit though with HR through the roof and I took 10 seconds of walk breaks about 2-3 times 🙁 (One of my goals is to conquer hills, so walking disappointed me).  Although I did have a lot of oomph to race up the tiny bit of hill to get to the finish line.

Had to wait until 10:00am to see my result of 32:16 , a PR by 37 seconds from the Resolution Run in Jan. And my first thought on seeing that number – darn those 16 seconds. lol. But I was absolutely overjoyed at those numbers. I was doubtful if I had it in me at this point, and I will conveniently forget the downhill factor as I rejoice in it. 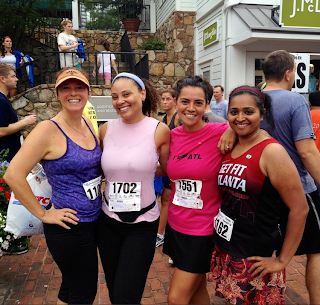 Now the sensible thing would’ve been to go home, shower, eat sensibly, and nap. Uh huh, No. Us girlfriends wanted to do things a bit crazier. We showered and ate. A lot! A lot of really good food. Then we sat around talking for a while before heading to Big Peach (my friend wanted to see my favorite running store!). And before we knew it, it was time to leave home for the half! 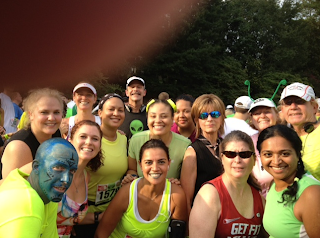 I have no idea how the GFA team found me as I was walking towards the corral ! Obligatory fun picture for Facebook and we were off !! By mile 1, my legs went – Woooaaahhh … hold it right there lady! I immediately turned my intervals into 1:1 instead of 2:1. Just as the legs were feeling better, my stomach started shifting and rumbling. Not good. Not good at all. Miles 2-7 were spent with me clutching my belly with an agonizing prayer to find a portapotty. So much agony that running was out of question, so walking it was. At 15-16min/mile. No portapotty along the course and I had to wait until we entered riverside park for the restrooms. Mile 6/7 and time – 1:32, just about when the first person finished.

After the portapotty break – I was a girl transformed! We made great time the rest of the miles. Flying through the dark. Flying at my slow pace, I mean. When we’d see people on the route, we’d get them to start cheering for us, and everytime we’d see a girl in a sparkleskirt we’d yell out ‘sparkle sister’! I was in a fun green sparkleskirt, of course. Those miles were nuts with no lights and frogs croaking really loudly by the river (at one point we wondered if they were real or put there for the ‘alien’ effect). My friend and me sprinted to the finish and crossed at the same time – that was some kick I produced after all that time on my feet!

Our time – a pathetic, agonized, fun filled, gossipy 3:16. By far the slowest half. 10min slower than my first one where cried the last 3.5 miles.  But – other than those miles of my stomach protesting (which could’ve been brought about by dehydration and some other internal issues rather than the food – my friend had no such issues. And I’m the one who can tolerate Indian food better), came out unscathed. Which was sadly not for many of the runners and volunteers who suffered the dehydration effects badly.

It was all a blur after the race, all I remember is that I slept with my compression sleeve on in one foot. Huh? Don’t ask. I don’t know.
This morning – I was spent. Exhausted. Physically, I felt fine other than some really really bad chaffing battle scars. Mentally though it was something else. I wanted to crawl and run away to the forest and hide. Not run. Because I didn’t want anything to do with run ever again.

After a good lunch where I ate half the restaurant and some fresh air walking at Marietta Square, I felt much better. But still not that enthusiastic about a new week of 18 mile long run and the start of Yasso800s. I’m sure that my attitude towards my two favorite runs will change after a good nights sleep (I’m still questionably functioning on 8-9 hrs of sleep spread over 2 nights).

I don’t know if this is just me as a newbie (only 2.5 years old to a world away from my couch) or because I messed up on my recovery (no recovery drinks on both races until about 1.5-2hrs afterwards). We always talk about the total miles on our legs and the importance of rest days and fallbacks, but the toll mentally is what took me unawares.  But I remember a very similar feeling after New Orleans.

So would I do it again. Frankly, I don’t know. And I am leaning towards …. I don’t think so. Unless there is a very very valid reason for it – like someone would whisk me away for a month in Bora-Bora or a magic wand that will clean my house in an instant. So something like Goofy – out of question for this year.

A flash during a run