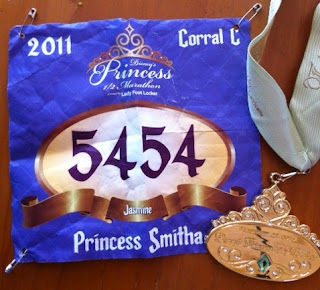 The Disney Princess Half Marathon.

Me, the anti-princess mom got swallowed by the Disney marketing magic (it was the promise of a Tiara medal that did it for me). The kidlet’s 5th birthday was the same week and I convinced the husband to celebrate it in Disney and I was waiting for this day like a giddy schoolgirl.

It started the day before as went to the Wide World of Sports for the Expo. 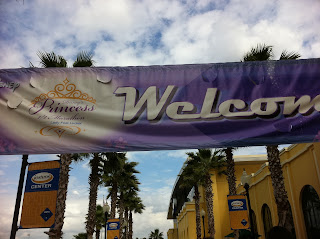 Just glad that I got this.
Carb overloaded at Ghirardelli’s in Downtown Disney. 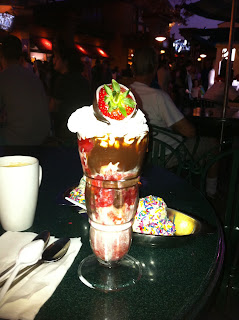 Feb 27th
2:15am – my alarm went off and I woke up from a restless sleep of about 4 hrs. Armed with a bagel and chocolate milk (thanks to the husband who woke up to see me off, even though he was going to sleep in with the kids until I finished and came back), I took the shuttle bus from my hotel to the starting area(zero waiting time) and joined 16,000 Princesses and 500 Princes. The walk to the corrals (Corral C) took all of the promised 20 minutes.

My Princess Jasmine costume was simple – a tech T in the same color as homemade harem pants (which were great to run in even when the temp went up to 78 at the end!). Hoop earring and some harem pant fabric wrapped around my sweaty band.

The Fairy Godmother signaled the start and we were off.
Another mile in and …. swoon.  (Prince Eric from The Little Mermaid, Me, Flynn Rider from Tangled, Tarzan, Alladin and Capt. James Smith from Pocahontas). It was a 15min wait that was sooooo worth it!! 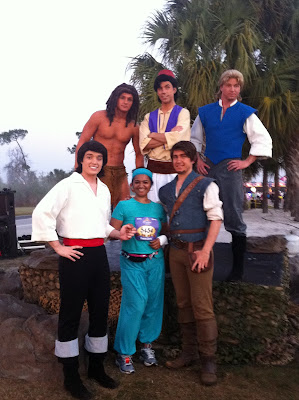 These guys inspired me to go faster. Until I entered Magic Kingdom, that is.
There is was!! The castle ! Where dreams come true! 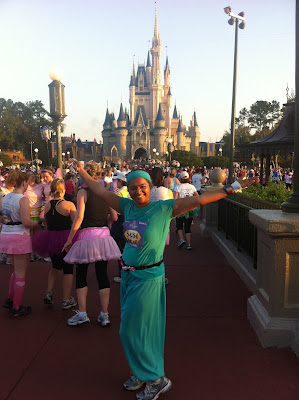 To Infinity and Beyond with Buzz Lightyear 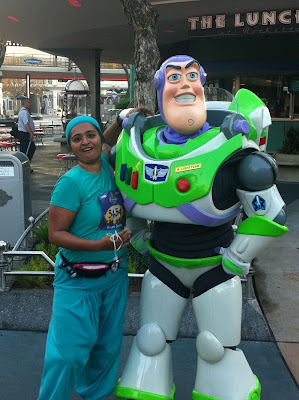 See how far I’m standing from the Red Queen. I like my head attached to my shoulders, thank you very much. 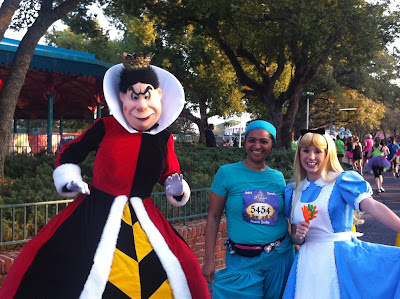 ‘
Prince Charming was …. super charming!! Cinderella had to leave when I was 5 people behind in line, but he was sooo worth the 20minutes wait. 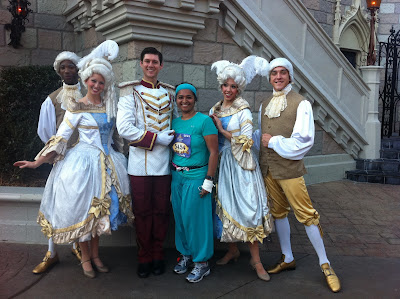 Prince Naveen was great !! He kept making me giggle with ‘Ribbit Ribbit’. 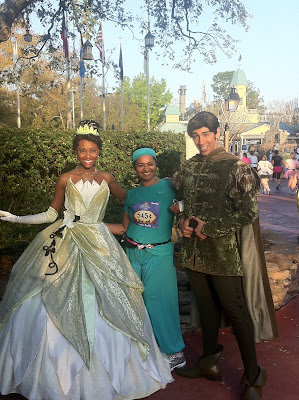 This one was for Kidlet #1. The birthday girl loves Peter Pan. 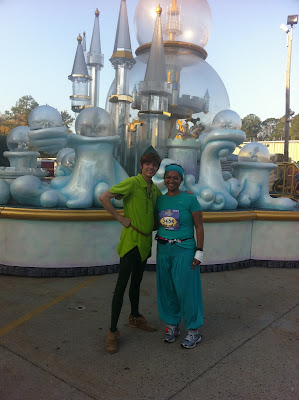 And of course Princess Jasmine needs Genie on her side. 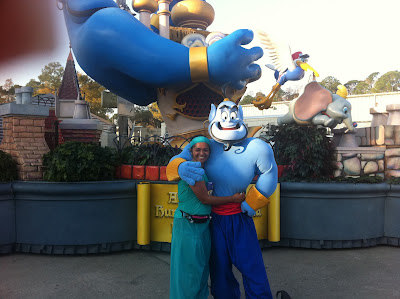 Beast gave me a hug as I was running out. The 15minutes wait was worth that hug. Met two other girls from corral C here, who were as hopelessly taking pics as I was. 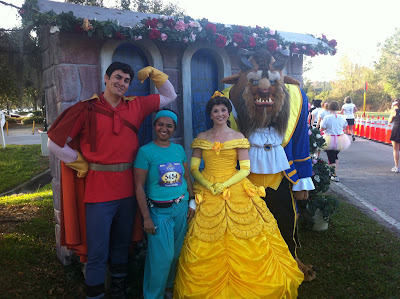 Prince Philip and Sleeping Beauty. What can I say? He made me feel like a real Princess. 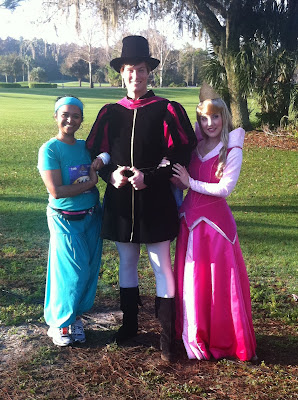 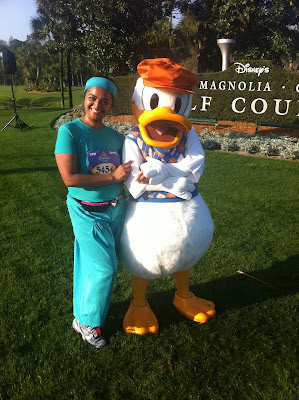 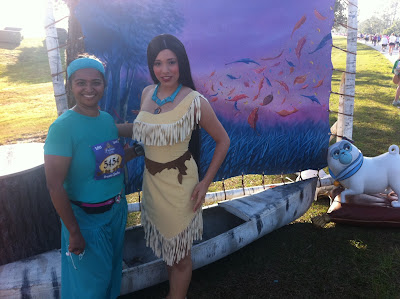 The running bug has bitten me. 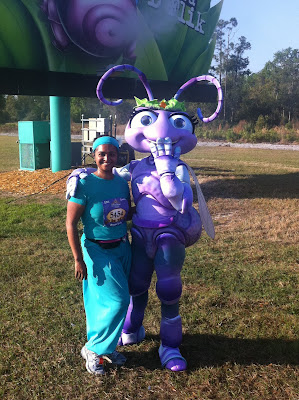 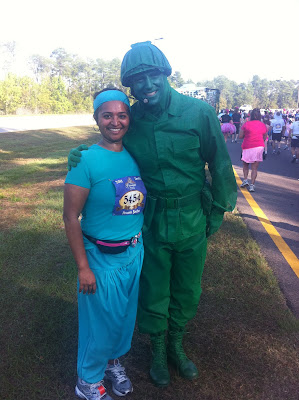 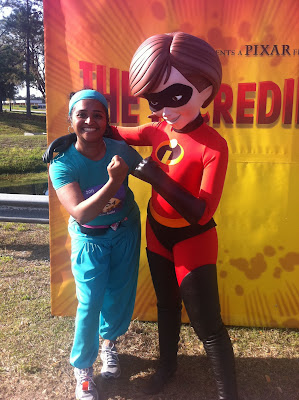 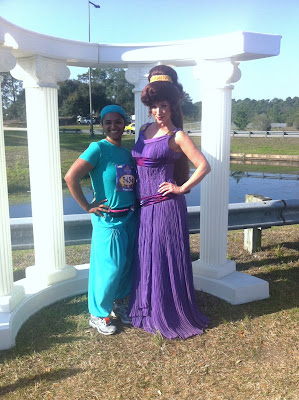 Kidlet #1 and My favorite Princess – Mulan! 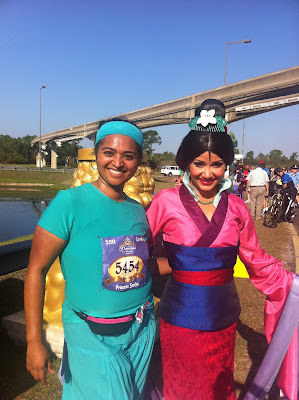 Don’t hate me, but I really was feeling that perky and enthusiastic at Mile 13. 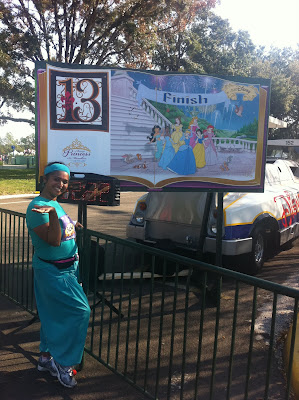 Just before the finish line. 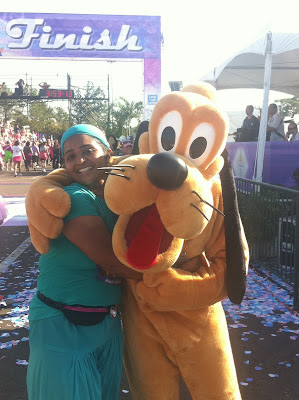 How I could not stop for this once in a lifetime picture !!! 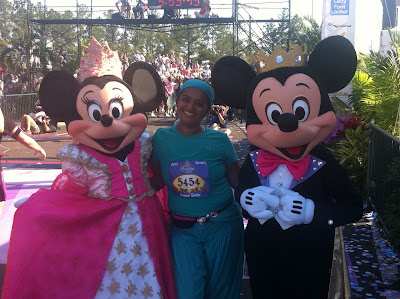 I’m a Princess !! (I need to take a better picture of the medal. Its super gorgeous, I promise) 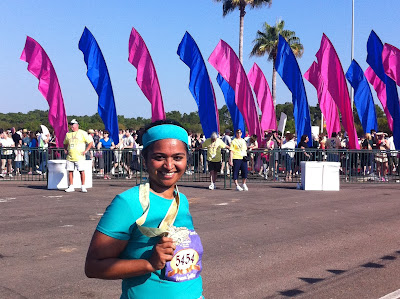 The celebration at Wishes Dessert Party at Magic Kingdom – the all  you can eat buffet dessert dinner. I probably put in more calories than burned in the morning. But oh so delicious !!!! 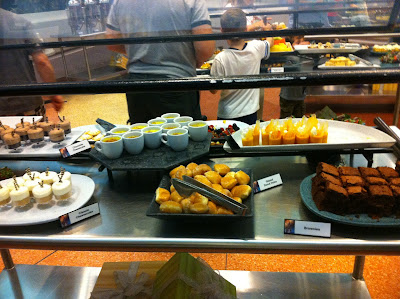 Before anyone asks – yes, I waited to get pictures with all characters I saw except for Lilo (dressed as Elvis) and Stitch; and Jessie from ToyStory. The pirates, the hunks heros, Prince Charming, Beauty and the Beast all were 10-15minutes of wait time. But the rest were a couple minutes max.

This was also my first race with no music. Disney entertainment along the way was great (too late tonight to upload the pics). A 101 on how not to race. My disciplined run/walk turned out to be sprint to next character/stop.

‘I love to Run moment’ of the Week