Snapshots from My First and Only Sports Meet in School 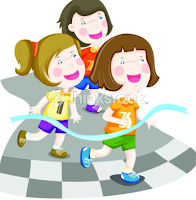 Long lost memories came flooding back with this DailyMile question. I wonder if any of my school friends will stumble on this and get a good chuckle out of it.

The year was 1987. I was 11 years old and in 7th grade (Eek! I just dated myself!). With nerdy glasses and a nose buried among books, I was never athletic.  But that particular year, for reasons best not disclosed to the general public, I wanted to try anything and everything. So I was amongst the most eager awaiting the annual sports meet.

I have vague memories of some of the events. Long jump was … a long shot for me. The Shot Put and Discuss events were hilarious. The weight and the discuss had a mind of their own and flew in every direction except the one I aimed at. I believe they refused to let me have my third shot. I triumphed at the Javelin, only because the nerd in me figured out a way to plan theoretically and get my spear to stick in the ground, and no one else did. Too bad they eliminated the event in the future meets.

Then came track events. The first event up was the 400m. About 8 of us girls lined up. 7 super sporty girls who were already whizz kids in field hockey. And … me. The signal was given and we were off. The other girls ran. I …. errr … put one foot in front of the other and moved forward.

I truly think that I ran as fast as I could, except that the “fast” was crawler. I huffed, and puffed and sweated in the sweltering Indian heat, but … I had yet to complete a loop and a half, when the WHOLE pack of girls finished the race.

I can still vividly remember the whole scene. And the names & faces of the girls who got the first and second place (Shanthi and Priya R – you girls were amazing!). And exactly where I was, and how out of oomph I was when they finished.

Although I secretly loved all things sports. My room was plastered with posters of sports players, my crushes were all boys who played sports, I always dreamt of being good at sports. But never again did I line up at the start, waiting for the signal to take off running.

Never again … until Jan 1, 2010, when I ran the Resolution Run 5k. Not much changed in terms of my running speed, but the 13 years of wisdom added to my attitude after I finished. It was the revival of my non-existant running career.

What was YOUR first race? How have you grown as an athlete since your first race?

The Best Compliment of them all

The Long Journey to India