Today I met Bart Yasso, the man behind the Yasso800s. A celebrity in the running community. Not just a celebrity, but a real person.
Not just met him, but talked to him, took tons of photos, picked his brain AND had dinner with him.

I’d already met him at the Peachtree Road Race expo in the morning and gushed like a giddy schoolgirl. But the kicker was him coming out to our track interval practice. Words fail me to describe my reaction, so I’ll use someone else’s – “I about pee-ed my pants when I knew”. Although I wasn’t running, there was NO way that I was going to miss this out.

Bart Yasso did our intervals with us while I clicked away like crazy! He spoke to one of the kids practicing there mentioning that he was the new champion in …. category (I was still awestruck to actually catch words). And then after an elaborate photo shoot, we went to dinner.

Dinner. Sitting right across Bart Yasso. He pulled up my blog over his phone and I think I froze at the moment. (“You are not faux, you are very real and have real passion”, he said of it).
Listening to everything he was saying. Asking him questions. (He’s Vegetarian too!).
Being christened his BRS – Best Running Stalker.

What is the one workout that you’d advice every runner to do?
Tempo runs: 8-10 miles at Marathon Pace teaches your legs how to run at that pace and it is just long enough that you experience tired legs towards the end.

How do I find out what my marathon pace is?
A half marathon run hard 5-6 weeks before is a good indication of your fitness level for the marathon race.


What is one race in the world that I must absolutely do?
Comrades in South Africa
He went on to speak so eloquently about the race and the experience and the ‘Greek Tragedy’ (as one of our group called it) of enforcing cutoff limits. I wish I could have captured it. Even though this race is 56 miles, 12 hr cutoff and brutal hills, it started a spark in me to put it on my bucket list.


What about races in the US?
Catalina Island Marathon, off the coast of LA.
Pikes Peak Marathon.
Runners World Cruise that takes you to awesome places in the Caribbean like St. Lucia, and ends in Barbados; with run expeditions everyday of varying distances.
Clearly, I need to start learning to like hills.

So I guess you like trail running?
We always have run on trails, except its now called trail running. Back then it was just called running.

How many pairs of shoes do you own?
Maybe about 3-4
I was expecting a bigger number, a much more bigger number and that surprised me into silence (or something as close to silence as possible).

What do you eat before a race?
Oatmeal is not usually recommended usually. One of the guys died during the swim in an ironman because he had thrown up his oatmeal in the water and he choked on it.(after we butted in and talked about oatmeal and triathlons).

We talked about injuries and the therapeutic nature of running and …. Oh, there was so much more that I asked, and he patiently replied and I soaked it all up. Except I can’t seem to remember anything much else.

Thank you, Bart, for spending an amazing evening with a bunch of people who admire you and for patiently answering every question that we threw at you.

“Never Limit where Running can take you” Mentally, Spiritually and Geographically. (he added these last words as he signed his book to me at the expo) 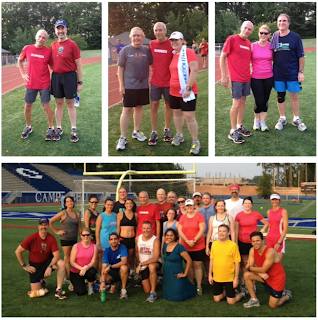 Please overlook any Writing 101 mistakes I may have made. I don’t think I’ve still gotten over my giddyness. Thanks Get Fit Atlanta for an A.M.A.Z.I.N.G opportunity of a lifetime.
(Visited 50 times, 1 visits today)

I Missed My Calling

24 Days to Chicago – I better pray for Ideal Temps!